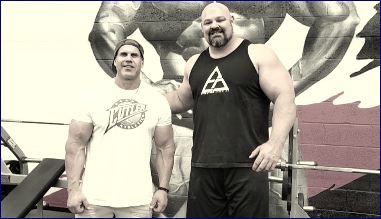 Shaw is a world-class athlete who has been named the World’s Strongest Man nearly four times.

Brian Shaw was born in Fort Lupton, Colorado, on February 26, 1982. He is the son of Bonnie Shaw and Jay Shaw, according to his family tree. Similarly, Juli Shaw is Brian’s sister.

Shaw grew up in the small town of Fort Lupton and attended Fort Lupton High School, where he earned his high school diploma and began playing basketball.

Following that, the basketball player attended Otero Junior College in La Junta, Colorado, to further his education. There, he worked with renowned coach Bob Austin (current head coach of Louisiana State University-Alexandria) and became one of the team’s best players.

Shaw attended Black Hills State University in Spearfish, South Dakota, on a full basketball scholarship. Similarly, he graduated from university with a degree in wellness management. Brain’s life as a child in a small town was dominated by sports.

When it comes to his professional career, Shaw began by playing basketball at the university level, but he later developed a passion for weightlifting.

He won the Denver Strongest Man competition in 2005 despite having no prior training. Later, after joining some professional training centers in 2006, he achieved considerable success in the field.

This is how the college basketball player became a weight lifter. Furthermore, in 2008, he was only qualified for the World’s Strongest Man competition.

Similarly, after enrolling in Fortissimus that year, Brian became the first person to lift six Atlas stones weighing between 136 and 193 kg (300-425 lb).

Brian’s 2010 turned out to be a fantastic year. He qualified for the finals of the World’s Strongest Man Competition at the start of the year, finishing in second place.

Brian won the Strongman Super Series for the second time in December 2010. Brian also competed in the World’s Strongest Man competition in 2011 and 2013.

In both years, he finished first, defeating Savickas. Shaw won the World’s Strongest Man competition once more in 2015 and 2016.

Shaw competed in the World’s Ultimate Strongman competition in Dubai the following year. His overall performance was also strong; however, he finished second.

Brian also competed in the 2018 Arnold Strongman Classic, where he finished in a variety of positions across multiple events.

Event1 (The Bag Over Bar)=2nd position.

Aside from his regular work, he has appeared in the History Channel series “The Strongest Man in History,” which premiered on July 10, 2019.

Brian is happily married to his life’s love, Keri Jenkins. The couple married on July 4, 2015, after dating for a long time.

These couples met for the first time at a charity event where Shaw was the celebrity guest.

Keri Jenkins, his wife, is the owner of Fit Mommy Academy and runs her own fitness business.

In addition, she is a mathematics teacher. Braxton and Kellen, the children of both couples, were born.

Brian has an estimated Net Worth of $15 Million.